Cholent - a Jewish Sabbath-day dish of slow-baked meat and vegetables.

Since Biblical times the Jewish people have scattered and settled all over the globe, adapting their foods to suit the regions where they’ve settled. Over the centuries countless regional ethnic dishes have been made kosher to fit the Jewish religious standards for pure eating. This means that “Jewish food” is really world cuisine; there are very few dishes that are uniquely Jewish. Bagels? A Polish baked bread originally created for Lent and later embraced by the Jews. Gefilte fish? A German dish adopted by Yiddish cooks. But cholent– well, cholent is one of the few foods that is totally and completely Jewish. 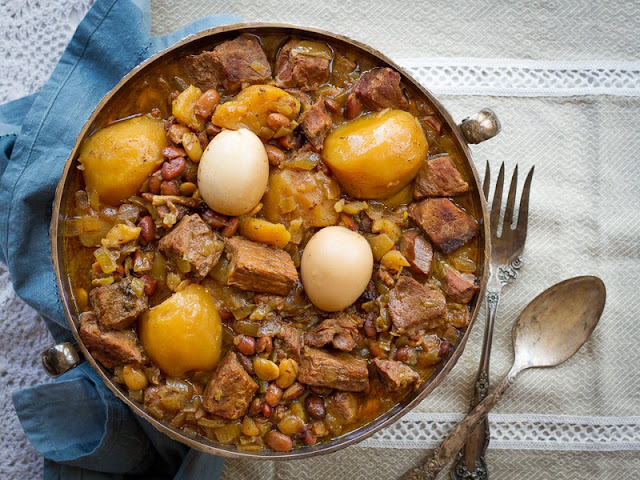 Cholent is uniquely Jewish. It was created because Jewish law does not permit cooking on Shabbat. To adhere to this God prohibition, Jewish cooks began to create meat and bean stews in heavy pots that would slowly simmer inside a low-heat oven overnight. They would prepare the stew on Friday before sundown, cook it partially, and place it into the oven to continue cooking throughout the night. That way, there would be no need to kindle a fire or light a stove during the hours of Shabbat; they would simple remove the stew from the oven at mealtime and it would be fully cooked and ready to serve.

1. In a large slow cooker (the larger the better!), place the potatoes in a single layer on the bottom of the cooking vessel. 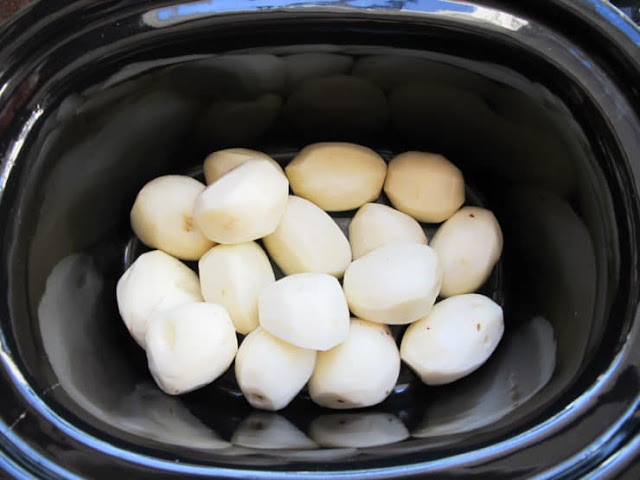 2. Sprinkle the onions over the potatoes. 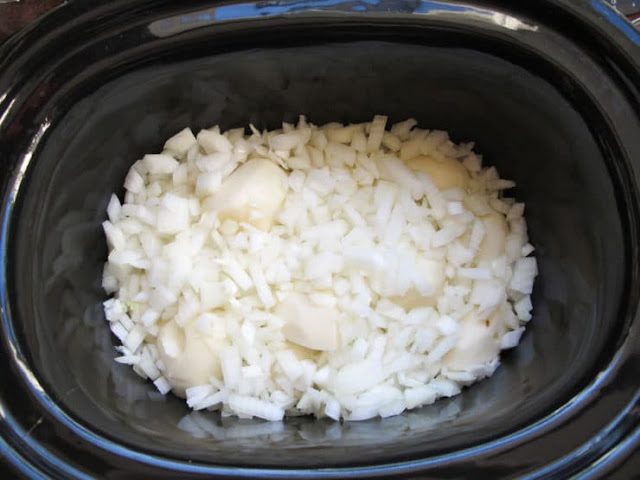 3. Place the beef in a single layer on top of the onions and potatoes. Place the two marrow bones in the meat. 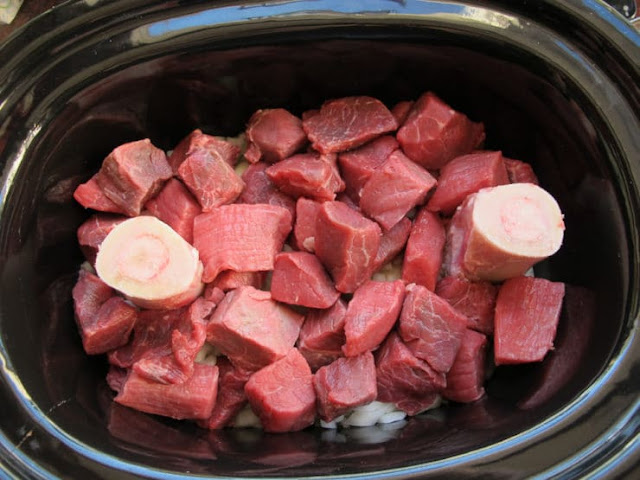 4. Rinse the beans clean, checking for any stones or impurities. If using barley or kasha, do the same with the grains. Sprinkle the beans (raw or pre-soaked) and optional grains over the top of the meat. Place the three whole garlic cloves into the meat, evenly spaced. Sprinkle the whole mixture with the black pepper. Add the eggs, rinse them well and then tuck them into the meat. 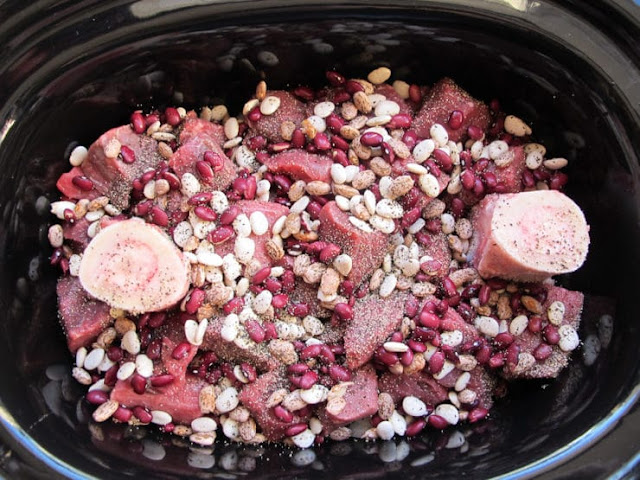 6. Pour the liquid over the cholent. Add additional water until all of the beans and pieces of meat are covered. For us, it's usually another 1-2 cups of water in our slow cooker-- it will vary; I usually add a bit more liquid if using grains, because they will soak it up. 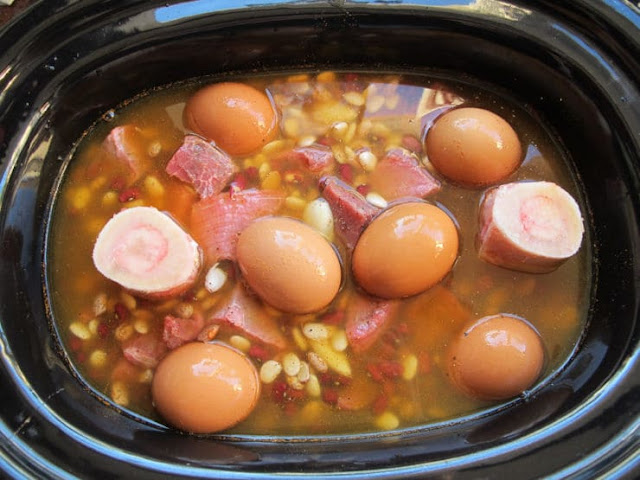 7. Cover the slow cooker. Cook on low heat for 16 hours. Check occasionally as it's cooking; add additional water and stir a bit if it's looking too dry. Most cookers will auto-switch to warm when the cooking is complete. If yours doesn’t, set it to warm until ready to serve. 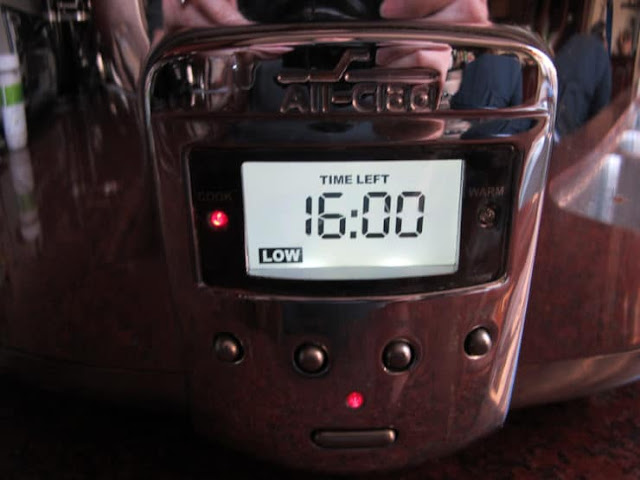 8. It will look a bit strange when it's done cooking! Don't worry, just dig in and you'll see that it's perfectly cooked below the surface. Peel the eggs before serving the cholent. 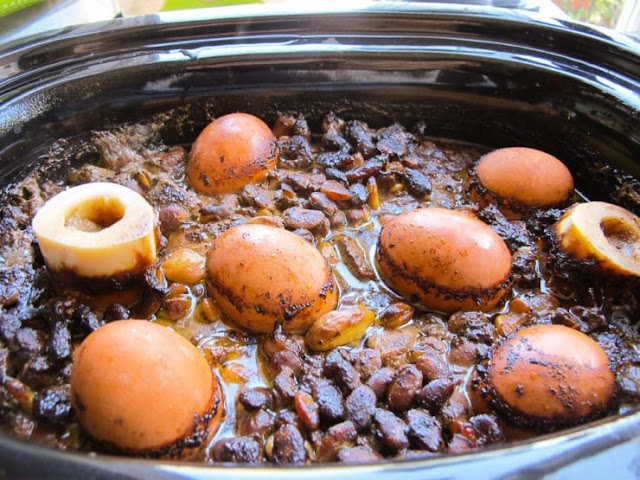 To cook this recipe in the oven, layer the ingredients in a large heavy 7-8 quart Dutch oven. Make sure you have enough liquid to just cover all ingredients. Cover with lid and cook cholent at 200 degrees F for 12-16 hours.
on January 23, 2022
Email ThisBlogThis!Share to TwitterShare to FacebookShare to Pinterest
Newer Post Older Post Home