Friends coming over? Need a place to stay? My friend Lou own a bed and breakfast in downtown Vicenza! She will be happy to host you or your friends!
Bookings at www.calou.it 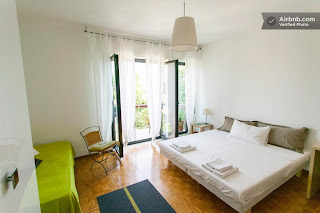 Need a nanny or a cleaner? My friend Daniela will be happy to help you. She speaks English fluently and have experience with kids.

Hungry? Come to have the best pizza in Vicenza at Angolo Palladio!
www.angolopalladio.it 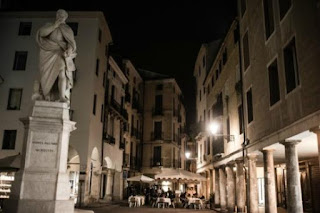 Want to buy some cheese? Fresh vegetables? Fresh fish? Come with me to the Vicenza flea market, every Thursday around 10 am I go.  I can help you to order your food if you don't speak Italian.


on February 27, 2013
Email ThisBlogThis!Share to TwitterShare to FacebookShare to Pinterest 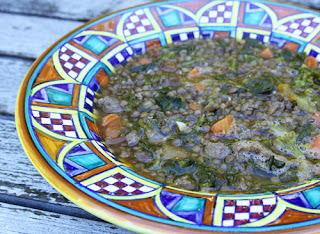 
1 - Combine the lentils with 2 quarts of water in a large stock pot;

2 - Bring to a boil, then reduce the heat and simmer for 20 minutes or until tender;

3 -In a separate pot, heat the olive oil and cook the carrots, onions, and celery until tender;

4 -Add the garlic and sausage meat and continue to cook until the sausage is lightly browned, breaking it up into small pieces as it cooks;

5 -Add the sausage and vegetables to the lentils with the tomato paste and chopped tomatoes, season with salt and pepper and red pepper flakes if using;

6 - Add the broccoli rabe to the lentil pot with 2 to 3 cups of additional water;

7 - Continue to cook until the broccoli rabe is tender.

8 - Taste and adjust seasonings if needed.

9 - Serve with a sprinkling of grated parmesan cheese.

on February 27, 2013
Email ThisBlogThis!Share to TwitterShare to FacebookShare to Pinterest
Labels: Lentil soup with broccoli rabe 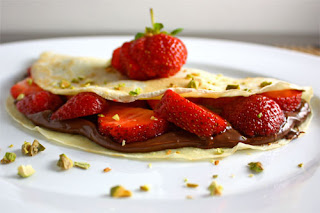 1. In a large mixing bowl or blender combine all ingredients; beat until smooth.

2. Heat a lightly oiled griddle or frying pan over medium high heat. Pour or scoop the batter onto the griddle, using approximately 1/4 cup for each crepe. Tilt the pan with a circular motion so that the batter coats the surface evenly.

3. Cook the crepe for about 2 minutes, until the bottom is light brown. Loosen with a spatula, turn and cook the other side.

4. Serve hot with nutella or whatever you would like.
on February 08, 2013
Email ThisBlogThis!Share to TwitterShare to FacebookShare to Pinterest
Labels: French Crepes 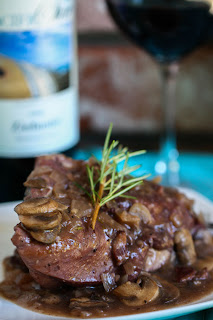 Cut the chicken into separate pieces, place the chicken in a bowl and add the wine, shallots, carrots, celery, garlic, thyme with salt & pepper to taste.  Leave the chicken marinating for at least 12 hours inside the refrigerator.

The next day your chicken will be purplish color, take the chicken out of the marinade.  Over a hot pan with some butter, sere the chicken in the pan and add the cognac, remove it and then cook the bacon.  Add all the other ingredients in a large heavy bottomed pan, and cook for at least two hours in low heat. 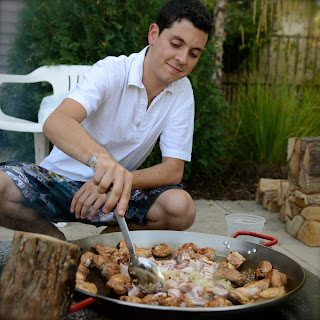 Lucas Migliorelli has lived and worked in six different countries all over the world.  His family immigrated to Brazil from Veneto and Le Marche region of Italy to escape war .  At a young age, Lucas enjoyed cooking with his grandmother and family.  Inspiration to cook, and food harmonization came naturally.  At 14, his nickname among his friends was "Lasagna".  He also was making small chocolates that he would sell to other kids at school, however, the school put a stop to it after lucas was making over a hundred dollars a day.
Lucas's first job was working at a small Italian family restaurant at the age of 16 in San Paulo, Brazil.  His tallent and creativity gained a lot of attention when he won first place at a cooking competition among senior professional chefs at the young age of 18.  For one year, Lucas worked for Hotel Sofitel in Florianapolis, Brazil as a chef and learned french cuisine.  He then moved to Argentina to continue to learn about food/ wine, and begin his traveling experience.  In 2009, he moved to London to study the english language and again a new type of cuisine, this time, South African food.  The six months he spent in New Zealand was working with Italian food in both the north and south islands.  In Minneapolis, Minnesota, Lucas continued what he started in Brazil as a side job, personal chef work.
Lucas now lives in Vicenza, Italy back where his family roots are in Veneto.  In his spare time, Lucas enjoys studying wine and food history, especially Italian.  His personality and presentation of his food makes him stand out among other chefs his age.  He now teaches cooking classes in centro storico tuned towards teaching Americans living in Vicenza.  Lucas is always happy to meet new people and is available as a personal chef for events or private parties.
on February 08, 2013
Email ThisBlogThis!Share to TwitterShare to FacebookShare to Pinterest 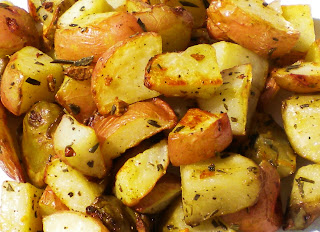 Preheat the oven to 400 degrees F. Cut the potatoes in half or quarters and place in a bowl with the olive oil, salt, pepper, garlic and rosemary; toss until the potatoes are well coated. Dump the potatoes on a baking sheet and spread out into 1 layer; roast in the oven for at least 1 hour, or until browned and crisp. Flip twice with a spatula during cooking to ensure even browning.
Remove the potatoes from the oven, season to taste, and serve
on February 07, 2013
Email ThisBlogThis!Share to TwitterShare to FacebookShare to Pinterest
Labels: Nonna's Potatoes 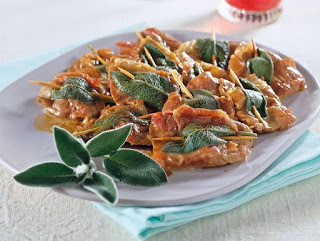 1.     Place the veal cutlets side by side on a sheet of plastic wrap.
2.      Lay a piece of prosciutto on top of each piece of veal and cover with another piece of plastic.
3.     Gently flatten the cutlets with a rolling pin or meat mallet, until the pieces are about 1/4 -inch thick and the prosciutto has adhered to the veal.
4.     Remove the plastic wrap and lay a couple of sage leaves in the center of each cutlet.
5.     Weave a toothpick in and out of the veal to secure the prosciutto and sage.
6.     Put some flour in a shallow platter and season with a fair amount of salt and pepper; mix with a fork to combine.
7.     Dredge the veal in the seasoned flour, shaking off the excess.
8.     Heat the oil and 1 tablespoon of the butter and in a large skillet over medium flame.
9.     Put the veal in the pan, prosciutto-side down first.
10. Cook for 3 minutes to crisp and then flip the veal over and saute the other side for 2 minutes, until golden.
11.  Transfer the saltimbocca to a serving platter, remove the toothpicks, and keep warm.
12. Add the wine to the pan, stirring to bring up all the delicious flavor in the bottom; let the wine cook down for a minute to burn off some of the alcohol.
13. Add the chicken broth and remaining tablespoon of butter, swirl the pan around.
14.  Season with salt and pepper.
15. Pour the sauce over the saltimbocca, garnish with sage leaves and lemon wedges; serve immediately.
on February 07, 2013
Email ThisBlogThis!Share to TwitterShare to FacebookShare to Pinterest
Labels: Saltimcocca alla Romana
Newer Posts Older Posts Home
Subscribe to: Posts (Atom)