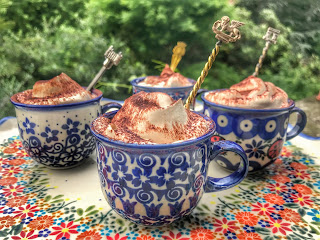 A fusion of Ireland and Italy in one cup!?
This is a very simple semifreddo to prepare. 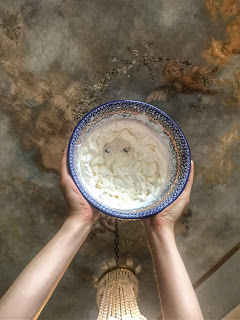 Adapted from traditional Coffee Semifreddo recipes that we can find in every cook book from Nonna's across Italy. We add Coffee liquor and Bailey's to the recipe instead of just coffee. If you would like to make the traditional recipe instead just substitute the 1/4 cup of Bailey's and 1/4 cup of coffee liquor for 1/2 cup of strong espresso coffee.
It's also possible to transform the Coffee & Bailey's semifreddo in a mousse. For making the mousse instead of the semifreddo, just let cool in the refrigerator instead of the freezer. Other use for this delicious dessert is to use as a cake filling. Just imagine how delicious a cake can be with coffee and Bailey's!


So here is the recipe for the Coffee & Bailey's Semifreddo: 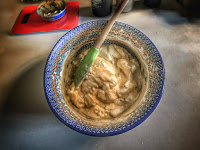 In a big bowl, mix the condensed milk with mascarpone until is all incorporated. Then add the coffee liquor and Bailey's.
Using a mixer whip the cream until is firm. You can test it turning the bowl upside down.
Fold the whipped cream with the coffee & Bailey's mixture, fold very carefully to make it most fluffy as possible.
You can set the semifreddo in espresso cups in the freezer for about two hours.
Before serving, dust cocoa powder in the top and add a little bit more whipping cream.
It's possible to keep the Coffee & Bailey's semifreddo for six weeks on the freezer.

*For the coffee liquor you can use any type, but you can easily make your own following the recipe here in this link.