Amatriciana, also called matriciana, gets its name from the city of Amatrice, which was once located in the region of Abruzzo and is now part of Lazio. 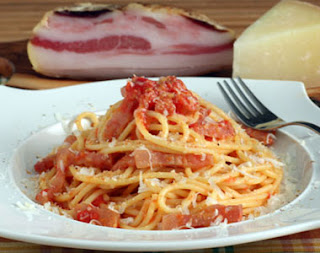 Bring a large saucepan of water to a boil. Add tomatoes and cook for 30 seconds, then drain. Peel tomatoes and cut in cubes; set aside. Cut guanciale (bacon) into matchsticks. In a large saucepan, combine guanciale (bacon) and a little oil. Cook over medium-low heat, stirring occasionally, until begins to turn golden, about. Add onion and red pepper flakes to pot; continue cooking, stirring occasionally, until onion is softened, about 6 minutes. Add wine, increase heat to medium-high and cook until wine has evaporated, about 3 minutes. Stir in tomatoes and parsley; reduce heat to low and gently simmer, covered, until sauce is rich and flavorful, about 50 minutes. Remove from heat. Add the cheese and olive oil.

Bring a large pot of salted water to a boil. Add bucatini and cook until al dente. Meanwhile, gently reheat sauce. When pasta is al dente, drain pasta, transfer to a large bowl, add sauce and toss to combine. Serve immediately, passing cheese and pepper at the table.

Very simple, delicious and healthy meal. The origins of this dish come from the peasants farmers, they would hunt and gather what they could for their meals combining different meats, to make a complete dish.

In a large frying pan with olive oil, brown the poultry/rabbit and the sausages. Remove everything from pan and mix all the ingredients in a big bowl or in the baking tray. Put to roast for at list 40 minutes in 180C/350F. Stir occasionally. For the last 5 minutes turn on your oven grill mode, and let get very crispy and almost burned. Be careful to not let excessively burned! 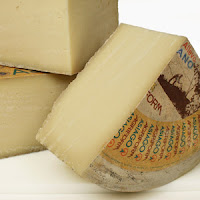 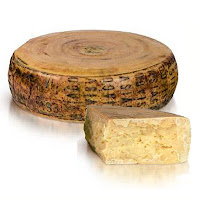 
We cooked and ate a lot, was very fun!