Bigoli - The Bigoli is a long, fat pasta (solid in the middle), like a big spaghetti of Venetian origin.  It is spread throughout the region and is also found in East Lombardy.
The recipe for bigoli is traditionally prepared with wheat flour, water, and salt.
Italian's describe the main feature of this pasta as, "Pasta Forte" which refers to it's "roughness" that allows it to hold sauces.  Bigoli has a peculiar and time consuming method of preparation.  The traditional pasta press is a hand operated die press, with two handles that screw down, compressing the dough through the holes at the bottom (this is attached to a small bench).  The cylinder is loaded with dough and screwed down, the pasta comes out the bottom giving you roughly one portion per cylinder.
There are different recipe variations of bigoli that are obtained by varying the type of flour used.  Saracen flour is black and is used to make darker (brown) bigoli.  Some recipes also call for duck eggs to be used instead of water.

There are so many traditional sauces with bigoli, however, the most common is from the mountainous areas of Veneto, "Bigoli All'Anatra" - bigoli with duck sauce.  Other common recipes are: Bigoli al Baccala - from Vicenza; or Bigoli con Sardele - from Venice.

Every year, on the last week of April, the so-called "party of the bigoi Torcio" is held in Limena (Padova province).  Every Saturday and Sunday in May is "The Feast of Bigoli in Rovolon" (also in Padova) in the vicinity of Carbonara.  There is another festival held in May on the third weekend, also held in Abano Terme in Monterosso. 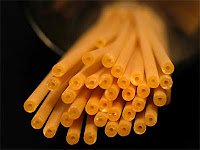 Bucatini is a thick pasta with a hole running through the centre. The name comes from buco, meaning "hole", while bucato means "pierced".
Bucatini is common throughout Lazio particularly Rome. It is a tubed pasta made of hard durum flour and water. Its length is 25–30 cm (10–12 in) with a 3 mm (1/8 inch) diameter. The average cooking time is nine minutes. Is traditionally served with Amatriciana sauce, buttery sauces, or thin tomatoes sauce with fish.

Fettuccine (literally "little ribbons" in Italian) is a type of pasta popular in Roman cuisine. It is a flat thick noodle made of egg and flour (usually one egg for every 100 g of flour), wider than but similar to the Tagliatelle. It is often eaten with sugo d'umido (beef ragù) and ragù di pollo (chicken ragù).
In Italy Fettuccine is traditionally made fresh (either at home or commercially) but dried fettuccine can also be bought in shops.
Have you ever asked yourself, what is the difference between Fettuccine and Tagliatelle? The answer is, the Fettuccine is slightly thiner than the Tagliatelli; and from different region. The Fettucine is from Rome and the Tagliatelli is from Bologna. 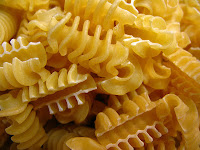 Radiatori - Radiatori are small, squat pasta shapes that are said to resemble radiators. They somewhat resemble rotini in shape, but are generally shorter and thicker with a ruffled edge. Radiatori are often used in similar dishes as rotelle or fusilli, since the shape works well with thicker sauces.

Pappardelle - Pappardelle are large, very broad flat Pasta noodles, similar to wide fettuccine. The name derives from the verb "pappare", to gobble up. Pappardelle have the origins from Tuscany, but is also diffused in other Italian regions.
The fresh types are two to three centimetres (¾-1 inch) wide and may have fluted edges. Dried egg pappardelle have straight sides. This pasta is traditionally served with very rich, heavy sauces, especially sauces which include game such as wild boar, and it is particularly popular in the winter, when it can make the basis of a hearty, warming meal.

Penne - Penne is a type of pasta with cylinder-shaped pieces. Penne is the plural form of the Italian penna, and is a cognate of the English word pen. In Italy, penne are produced in two main variants: "penne lisce" (smooth) and "penne rigate" (furrowed), the latter having ridges on each penna. There is also pennoni("big quills"), which is a wider version of penne.  Penne is a popular ingredient in pasta salads. Penne makes an excellent and versatile pasta for many applications because of its very practical design. The hollow center allows it to hold sauce, while the angular ends act as scoops. Penne rigate's ridges allow it to hold still more sauce, as well as offering an alternative textural option for certain dishes; penne lisce offers a refined sensation to the palate.