Authentic gulyás is a beef dish cooked with onions, Paprika, tomatoes and some green pepper. 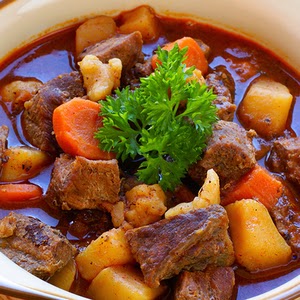 Potato and noodles (csipetke in Hungarian) are also added according to some recipes.
Hungarian goulash is neither a soup nor a stew, it’s somewhere in between. Though in Hungary it’s considered rather to be a soup than a stew, so look for it among Soups on restaurant menus.
If cooked in the proper way goulash has a nice and evenly thick consistency, almost like a sauce. In Hungary gulyás is eaten as a main dish; noodle or pastry dishes, especially the ones made with cottage cheese (túrós csúsza, túrógombóc, strudel) go down well after the heavy soup.

For csipetke (Pinched noodles added to goulash or bean soup in Hungary. Csipetke comes from the word csípni, meaning pinch in English, referring to the way of making this noodle):
Goulash is hearty enough without csipetke, especially if you eat it with bread, so you can leave csipetke out.

How to make the csipetke: